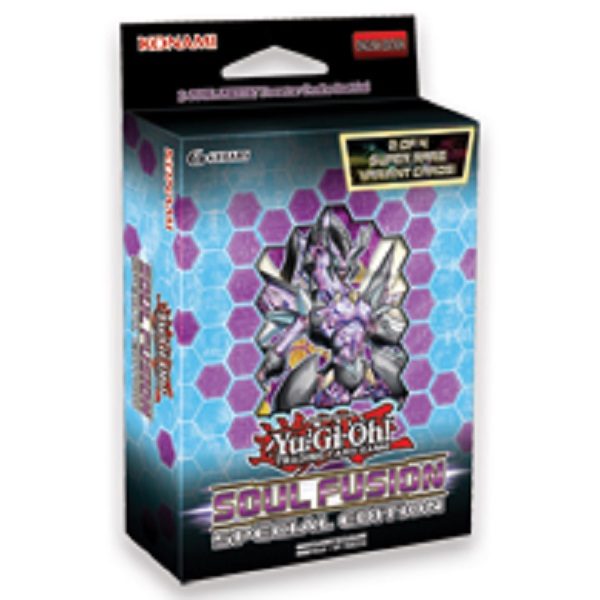 Soul Fusion Special Edition is jam-packed with value! Not only does it include 3 booster packs of Soul Fusion, each boxcomes with 1 of 2 Super Rare variant cards: Either Summon Sorceress or Isolde, Two Tales of the Noble Knights! Summon Sorceress is an all-star at every level of competition thanks to her ability to Summon a monster from your Deck with the same Type as a monster she points to. Isolde, Two Tales of the Noble Knights is a perfect fit in any Warrior-based Deck, but especially powerful with Soul Fusion‘s new “Noble Knight” cards! Each box ALSO comes with 1 of 2 Super Rare preview cards from Winter 2019’s Savage Strike booster set to strengthen your existing Decks, like Prank-Kids Rocksies for the Hidden Summoners’ “Prank-Kids” strategy and Neo Space Connector for Decks that revolve around Elemental HERO Neos.

Fall’s 100-card booster set, Soul Fusion, returns to the roots of Yu-Gi-Oh! with new Fusion Summoning strategies! Deck themes from the earliest years of Dueling get a new lease on life, and there are more new cards to bolster strategies from recent releases as well. Here’s some of what you can find in Soul Fusion!